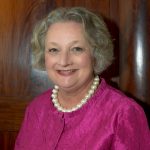 Neville Strumpf is an internationally-renowned scholar and educator in geriatric nursing. From her research on the harms of physical restraints in the care of frail older adults, to her decades of teaching at Penn Nursing, Strumpf is a tireless advocate for high-quality elder care.

During her tenure at Penn’s School of Nursing from 1982 until her retirement in 2008, she founded and was director of the School’s Center of Gerontologic Nursing Research and its Hartford Foundation Center of Geriatric Nursing Excellence. She also served as interim dean of the School, and for 15 years she directed its nationally top-ranked Gerontology Nurse Practitioner Program. Under her leadership and innovative scholarship, Penn Nursing was among the first to integrate gerontology into the undergraduate curriculum. Dr. Strumpf was awarded an honorary doctor of sciences degree during the University of Pennsylvania commencement on Monday, May 20, 2019.

Dr. Strumpf has been the Board of Managers President of Ralston Center since 2011 and a Board member since 2007.